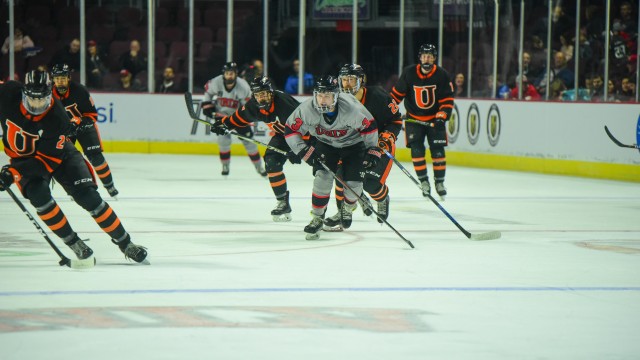 Team Win. That was the characterization from head coach Anthony Vignieri-Greener after UNLV knocked off defending ACHA champion third ranked Minot State Beavers 6-3 Sunday afternoon at City National Arena. The win capped off a five-game in eight-day stretch that saw the team go 3-2 during that period.

UNLV came out really strong and took it to the Beavers in the first period, taking advantage of the fact Minot State played the night before against Grand Canyon at City National Arena while the Rebels were off. John Moeller started off the scoring fun in the first period with help from Kane Toriumi and Eric Williams to give the Rebels a 1-0 lead 4:42 into the period. Not even four minutes later, Hunter Muzzillo and Paxton Malone set up Jared Turcotte’s fourth goal of the year to double the lead. UNLV was not done there as assistant captain Jake Saxe recorded his ninth goal of the season to make it a 3-0 lead after the first period. UNLV also outshot the Beavers 22-10 in that period.

As you would expect from the defending champions, Minot State turned things up a notch in the second period as the physicality picked up. UNLV had to overcome some penalty trouble, including losing starting goaltender Dorian Laganiere-Labranche after a game misconduct for a face mask, meaning David Anderson would have to come in. The Beavers did capitalize on a couple of power play goals to make it a one-goal game. However, with less than two minutes left in the period, Angelos Tsalafos capitalized on a UNLV power play opportunity to bring the lead back up to two. The Beavers added one late to make it a 4-3 game after two periods.

Head Coach Anthony Vignieri-Greener wanted to see his team get back to what was working in the first period, and they did just that as the fatigue continued to kick in for the Beavers. Anderson also made some huge stops on the Minot State shooters to keep them off the scoreboard the rest of the way. Moeller added a pair of goals in the third period to cap off the hat trick and the 6-3 Skatin’ Rebels victory. Rebels also outshot Minot State 41-26 in this contest.

- “Team win. Good Defense in our D-Zone. We didn’t turn over the puck in their zone. We capitalized on our opportunities and we had good goaltending.” – Head Coach Anthony Vignieri-Greener

- “We always try to make it a goal to always score the first goal; hot start, I think that played a big part {in the victory}.” – Forward John Moeller

Minot St got the better of the Rebels on this night as the Rebels allowed two shorthanded goals in the first period to the Beavers and really could never recover. UNLV did get their first goal of the contest at the 12:58 mark of the second period with help from the Beavers goaltender who misplayed the puck, ending up in the back of his net. Kane Toriumi was credited with the unassisted goal. After Minot State added one in the third period, Jayson Dimizio scores with roughly four minutes left in the game, making the final score in this one 5-2. UNLV had ten power play opportunities in this game and were unable to capitalize on any of them.

Looking to mix things up against a team they should beat, the UNLV coaching staff decided to put in an entirely different starting lineup, including forward Adam Nishino, who was playing in his first game of the season with the Rebels. What an entrance he and this lineup made as Muzzillo and Plonksi set up Nishino, who stuffed the puck past the GCU goaltender in the first minute of the game. The Rebels wouldn’t look back as they cruised to a 7-2 win. Only leading 2-1 after the first period, the Rebels opened up the game in the second period with goals by Kirk Underwood, Kane Toriumi, John Moeller and Hunter Muzzillo. GCU and UNLV both added one in the third period, resulting in the 7-2 final score. Hunter Muzzillo finished with three points (1G, 2A).

The Rebels season record now stands at 13-11-1, 11-4 at home (including the split with Jamestown at the Orleans Arena.) However, the next two games will be on the road, where the team is only 2-7-1 this season.

After a weekend off from games, UNLV will be in action next on January 24th and 25th when the teamtravels to Salt Lake City Utah to play a two game series against the University of Utah Skatin’ Utes.