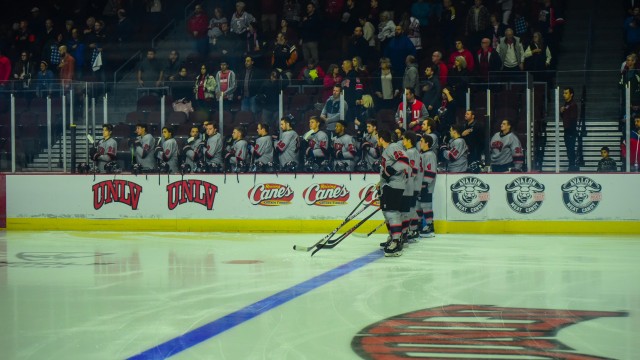 UNLV Hockey will be back at City National Arena to host three games in four days. Two games against the defending ACHA champion Minot State Beavers and one game vs. Grand Canyon University.

Sunday: Rebels and Beavers finish off the weekend with a 12:30pm game.

Last Time Out
UNLV split a pair of games against Jamestown at the Orleans Arena. David Lenzin scored the one and only goal for either team in Saturday’s matchup in a 1-0 win for UNLV. Newly acquired goaltender David Anderson recorded an 18 save shutout against his former team in his first start for UNLV. The win ended the nine-game winless streak. Monday’s game saw Jamestown defeating the Rebels 4-3 to earn the split on the road. Kirk Underwood tied things up at one on a power play with 2:57 left in the 1st period. However, the Jimmies responded not long after to regain the lead for good. Paxton Malone and Jake Saxe would also score for UNLV in this one.

Defending Champs for a Reason
Coming off a National Championship last season, #3 ranked Minot State is having another outstanding season. Minot State is 18-1-2 in ACHA D1 play and is 22-1-2 overall. This will be their first game action after the semester break as they haven’t played a game since December 14th, when they finished up a sweep of Jamestown.

UNLV is 0-2 vs Minot State this season, losing both games in Minot, ND to the Beavers. Over the past three seasons facing the ACHA powerhouse, UNLV has only managed to beat them one time. That occurred in UNLV’s first season of division one play, when the Rebels beat the then ranked #1 Minot State Beavers at City National Arena in November 2017, handing them their first regulation loss of the season at that time.

Four players have recorded over 20 points this season, with 11 players registering at least 10 points. Forward Adam Wowryk leads the team in goals (18) and is second in points (25). Johl Swedlo is first in points (26). Swedlo recorded a goal and an assist during the series with the Rebels in North Dakota back in November.

Scouting the ‘Lopes
GCU is in their first season of division one hockey and they have shown some growing pains as a result. GCU has only one win vs. a division one opponent (10-7 win over Utah on November 15th in Salt Lake City). However, GCU has taken UNLV, ASU and Arizona all to overtime this season. The first meeting between GCU and UNLV in Arizona saw GCU jump out to 4-0 lead before the Rebels stormed back in the third period to eventually tie the game and win in OT. For the season, UNLV and GCU have played three times, with the Rebels winning every game.

GCU is led by Trey Greene, who has six goals and six assists for 12 points. Forward Declan Carter leads the team in goals with seven. Defenseman Sullivan Murphy leads the team in assists with ten. Murphy has only one goal this season, and wouldn’t you know it came against UNLV on September 19th in Arizona. Overall, Murphy has four points against the Rebels (1G, 3A)

Keys to Victory for the Weekend

- Defend Home Ice: UNLV cannot afford to lose any more games on home ice if they have hopes of making it to Dallas for the ACHA Tournament. UNLV still has home games with Arizona State, Arizona and Oakland this season, all ranked teams. So take care of business at home the rest of the way and they may just find themselves on a plane to Frisco, Texas in March.

- Take it a Period at a Time: Head Coach Anthony Vignieri-Greener has stressed to the team not to look to far ahead in the future and just worry about winning the period at hand. If they can win all three periods, that would result in a Rebels victory.

- Take Care of the Neutral Zone: Giving up turnovers have been a problem for UNLV lately and has hurt them. Limit those and it should help the team be able to dictate more of the play on the ice.

Tickets can be purchased at rebelhockey.com/tix or in person on game nights at City National Arena. Tickets are $15 for adults, $5 for kids and students are free.
The games will also be live streamed on the UNLV Hockey YouTube channel and updates during the games will occur on our social media pages.