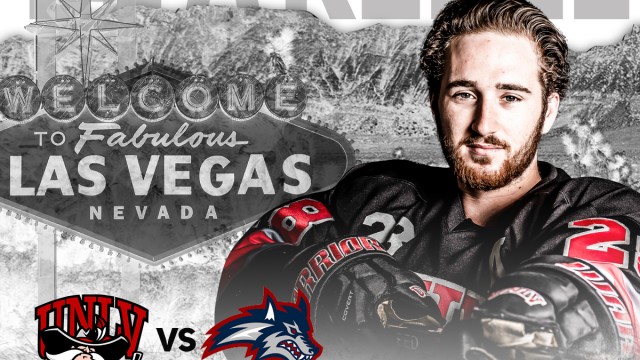 The 14th ranked UNLV Skatin’ Rebels (10-7-1) finally return home to City National Arena after playing the last seven games away from Las Vegas with the hopes to defend their home ice, ending a seven game winless skid in the process.

They will be taking on 21st ranked Stony Brook University (10-6), who is coming into Las Vegas riding a three game wining streak, most recently beating NYU in a home-and-home series.

Last Time Out:  UNLV is coming off a pair of tough losses to 5th ranked University of Arizona in Tucson, Arizona November 21st and 23rd. The losses capped off a rough month for the Rebels as the team went winless in the month of November; seven straight losses overall. The last win was back on October 19th at CNA vs. Midland.

Recent History With The Sea Wolves:

These two teams played each other last season in New York to finish the regular season, with Stony Brook coming away with a sweep against the Rebels, scoring six goals in both games of the series. Forward Keith O’Brien scored a hat trick for the Sea Wolves in the second matchup last season. The Junior has seven points so far this season. Leading scorer this season for Stony Brook Dustin Rinaldo (23 PTS: 11G, 12 A) also recorded two goals in last season’s series with UNLV.

Who To Watch For:

In addition to O’Brien and Rinaldo, UNLV will need to limit the play and space of Junior forward Joseph Slevin as well as Freshmen Michael Conlin and Brendan Pepe. Slevin comes in with 19 points to his credit (5G, 14A). He also recorded a goal against UNLV in last season’s series in New York. Conlin and Pepe both have 14 points. Overall, Stony Brook has six players with double digits points.

Keys to a UNLV Victory:

Puck drop for both games at City National Arena is 7pm. Tickets are still available at rebelhockey.com/tix as well as in person at the door on game night.

UNLV will be hosting their annual Toy Drive. All attendees that bring a toy will receive $5.00 off their ticket at the door, both nights. Toys will be donated to Chet Buchanan’s annual KLUC Toy Drive.

UNLV will be wearing special holiday jerseys both nights and will be available for purchase at the game.

If you aren’t one of the lucky ones that can join us in person for this weekend’s games, follow along with UNLV Rebel Hockey on social media for updates throughout the games. Live stream of the games will also be available on our YouTube channel.