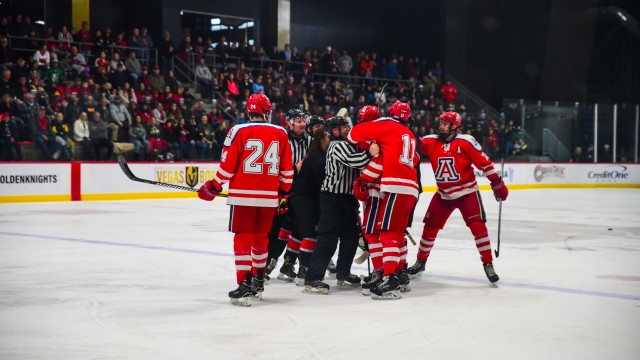 What:  UNLV (10-5-1) comes into this game with University of Arizona on a five game winless skid (0-4-1), most recently losing three straight games in North Dakota to Jamestown and Minot State. The games in Arizona will conclude a stretch of seven straight games away from City National Arena. UNLV is still looking for their first win in the month of November. Despite not playing in any games last weekend, UNLV did move up two spots in the ACHA rankings, moving from 16th to 14th.

Arizona comes into this series with an impressive 13-2-2 record (7-2-1 record at home) and benefits from a home heavy schedule.  UNLV will be their 8th and 9th game of a 16-game stretch at home. The Wildcats are coming off a two game sweep of Western Michigan last weekend, winning 3-2 Friday and 5-3 Saturday. Arizona is ranked 5th in the latest ACHA rankings.

Where: Tucson Convention Center (aka Tucson Arena). Home of Arizona Wildcats hockey also serves as the home of the AHL’s Tucson Roadrunners; affiliate of the Arizona Coyotes of the NHL. Tucson Arena has a capacity of 6,791 for hockey.

The Wildcats have eight players with at least ten points.  Leading the team in scoring is Bayley Marshall (7G, 8A), Alex Johanson (7G, 8A) and Anthony Cusanelli (6G, 9A), who have all accumulated 15 points in 17 games.   Max Mayer leads the team in goals with eight.

Anthony Ciurro leads the team between the pipes. He has a remarkable 1.49 GAA average, two shutouts to his credit and a strong 8-1-0 record in nine starts. Those numbers are good enough to be ranked 7th in the entire ACHA Division 1.

Both Goaltenders have seen plenty of action this season with first year goalie Dorian Laganiere and Senior Erik Eidissen. Laganiere has started in eleven games this season, most recently appearing in both games vs. Minot State and has a 6-5-0 record with a 2.38 GAA. Eidissen has appeared in seven games has a 4-0-1 with a 2.67 GAA.

“It’s been extremely focused. We’ve been really getting our minds clear and been getting back after it, so I think that with the last two weeks that we have been putting in work, we’re putting ourselves in a good spot for this weekend. “ –Kirk Underwood, #18

“Nobody wants to lose. But at the same time, it is a learning experience for us. You learn more losing sometimes than you do in winning, but we’re not focusing on that. We’re focusing on winning hockey games and I think we’ve done a good job this week correcting the mistakes that we made. For us moving forward with Arizona, it’s crucial wins for us. We gotta get them.” –Assistant Coach Nick Robone