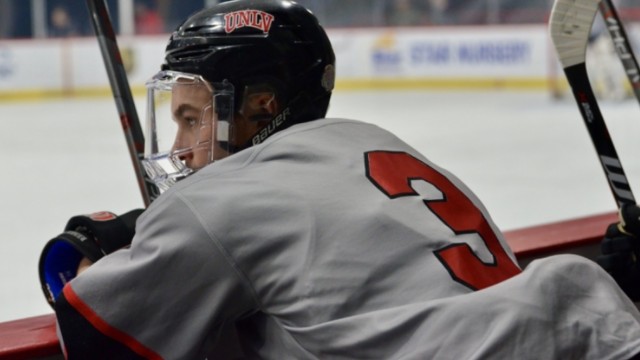 MINOT, ND - While UNLV has been dominant at home this season (8-0), playing away from City National Arena has proved difficult so far this season.  They have only managed two wins in eight road games (2-5-1), after suffering a two game sweep to defending ACHA champions Minot State, ending their North Dakota trip 0-2-1.

In Friday’s affair, UNLV gave up four goals in the first period as Minot jumped on the Rebels early. Jake Saxe registered the only goal in the first period for UNLV. The second period was much better for UNLV as they “won” the period, outshooting the Beavers 18-to-4 and registering the only goal in the period thanks to Tristan Mayer to make it a two-goal game.  However, the Rebels were unable to beat Minot State goaltender Bykowski the rest of the night and the Beavers added two in the third period, including an empty net goal to win by a score of 6-2. Again, the Rebels outshot their opponent but were unable to come away with the victory.

In Saturday’s contest, The Rebels played much better and battled all game long. Especially after Minot State scored 2:27 into the game. UNLV weathered the fast Beavers start and evened things up at one when captain Bas Assaf lit the lamp on the first power play chance of the game. Later in the period, it appeared that Minot State took the lead, but the referee determined the puck never crossed the goal line, a break for the Rebels, however, would be penalized with too many men on the play giving the Beavers a power play. It would be the Rebels riding the momentum to a short-handed goal by Jared Erickson, his 4th goal of the season, to give UNLV their first lead of the series.

Minot State was looking to show their over 1,200 fans at the game why they are defending champions as they took control of the 2nd period, outshooting UNLV 16-8 in the period and controlling a lot of the play. UNLV Goaltender Dorian Laganiere had a solid bounce back performance as he made a number of big saves to keep the Rebels in this contest. The only score in the second period would be by the Beavers on a two-man advantage power play at the 8:15 mark that would even the game up at two. UNLV had some great chances late to regain the lead, including a 3-on-1 rush in the last 30 seconds of the period, but were unable to finish.

Minot State would go ahead for good at 9:42 of the third period. UNLV would battle hard and have some good opportunities but again unable to finish. UNLV had stretches in the second half of the period where they were having a hard time getting the puck in the offensive zone but were in this one till the final buzzer. Including in the final 30 seconds of the game when UNLV had a 6-on-4 power play, with the goalie pulled, but ran out of time. Despite playing a much better game, still come away with a loss. Laganiere stopped 29 of 32 shots while Minot State goalie Joshua Bykowski made 31 saves on 33 Rebels shots to secure his 2nd straight win in as many nights (5th overall).

The two losses to Minot State now put UNLV at 0-4-1 on this current road stretch (10-5-1 overall). And it will not get any easier for UNLV as the Rebels will finish this seven-game road stretch in Tucson, Arizona in a couple weeks when they face the University of Arizona who is also ranked in the top 10 currently.

The series with University of Arizona will take place November 21st at 6pm (PT) and November 23rd at 12pm (PT) from Tucson.