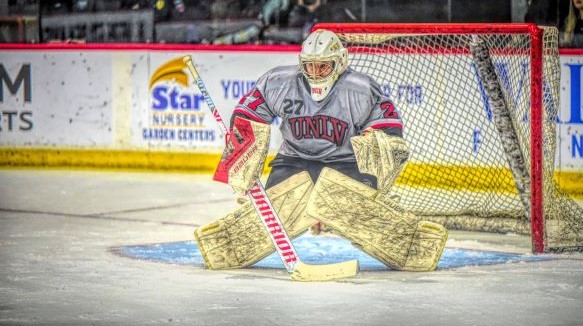 Jamestown, ND - The Skatin’ Rebels score two goals less than a minute apart in the third period to force overtime, but give up the winning goal with 2.1 seconds left in OT as Jamestown defeats UNLV 4-3.

Jamestown would record the only goal of the first period, as Aiden Potas would get his ninth goal of the season for the Jimmies. UNLV tied things up roughly midway through the second period as D’Andre John and Paxton Malone set up Kirk Underwood, who was able to get the puck past Jimmies goaltender Tyson Brouwer. Jamestown would later score two goals just fourteen seconds apart to make it a two-goal advantage leading into the third period.

Needing at least two goals to tie the game up, UNLV began applying the pressure to the Jimmies goaltender. It would pay off as D’Andre John scored his sixth goal of the season at 7:41 of the period to trim the Jamestown lead to one. Then, not even a minute later, assistant captain Jake Saxe scores the tying goal unassisted to even the game at three. Saxe also assisted on the John goal just moments earlier to finish with two points on the night. Eidissen and the Rebel defense would keep Jamestown off the board and UNLV would go to overtime for the second time this season.

In the 3-on-3 overtime, Jamestown appeared to have scored to win it but the goal was disallowed, a break for UNLV. Then just when you thought this one would go to a shootout, Jamestown did get one that would count with 2.7 seconds left on a shot from the slot, which appeared to be deflected in and the Jimmies would defeat the Rebels 4-3 despite UNLV outshooting Jamestown 38-16.

The Rebels and Beavers play Friday and Saturday night from Maysa Arena in Minot at 5:30pm (PT).