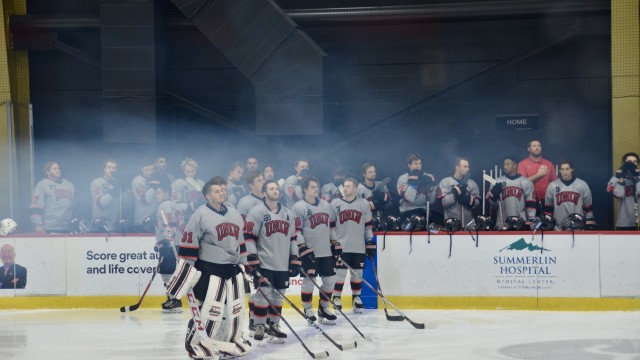 UNLV Remains Unbeaten at Home After Two Victories Over the Warriors

The Skatin’ Rebels are proving once again how tough it is for road teams to steal victories at City National Arena as UNLV remain undefeated through eight home games.

LAS VEGAS- Friday’s game got off to a roaring start for the 10th ranked Rebels as Jared Turcotte found the back of the net just 2:21 into the contest for the early 1-0 lead. UNLV would add one by Toriumi and one by D’Andre John that crossed the goal line just before the buzzer sounded, to make it a 3-0 game after the first.

After a goalie change to begin the second period for Midland, Midland would begin the scoring with a power play goal to trim the lead to two. The Rebels countered with an unassisted goal by leading scorer Paxton Malone to make it a three-goal game again.  Then, things got interesting as the Rebels had to kill over several penalties committed by starting Goaltender Dorian Laganiere, resulting in head coach Vignieri-Greener pulling him in favor of Eidissen. UNLV stood tall though as they only allowed one goal during the whole penalty killing time towards the end of the second period, which actually had to be played after the intermission due to confusion among the officials with the slew of UNLV penalties.

That penalty mess would become a distant memory in the third as D’Andre John, Hunter Muzzillo and John Moeller all lit the lamp in the third period as UNLV defeated Midland by a score of 7-2. 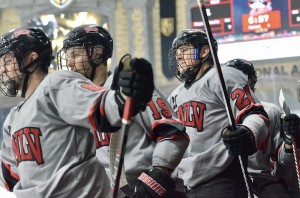 Saturday night, The Rebels scored within the first minute of the game and really never looked back as they scored five goals in the first period alone en route to an 8-1 win.  The line featuring Jared Turcotte, Kane Toriumi and Brendan Manning was on fire during the weekend series, especially in Saturday night’s game. Toriumi scored the first goal 30 seconds in the game with Turcotte recording the assist.  Toriumi then set up Brendan Manning a little over three minutes later to double the Rebels lead. Manning as well as Tsalafos set up Toriumi’s second goal of the period and third of the weekend. Sean Plonski and Jared Erickson also beat Midland’s goalie to cap off the five-goal first period.

Midland would break the shutout in the second period with a power play goal to make it 5-1. However, Midland would not be able to beat Eidissen the rest of the night and the Rebels would add a goal in the second period by Jared Turcotte, set up by Toriumi, who capped off a four point night and six point weekend for the second year sophomore. Nick Flanders and Jared Erickson got in on the fun in the third period to lift the Rebels to an 8-1 victory over the Warriors.

The wins make the Rebels an impressive 10-1 through their first eleven games and 8-0 in eight home games. However, UNLV will be playing away from City National Arena over the next five weeks, as the next eight games on the schedule will all be road games. First up, UNLV will head to Chicago to participate in the Chicago Classic, hosted by the University of Illinois for the second straight season. Last season, the Rebels went into the windy city and captured the tournament title after wins over Alabama and the host team Illinois.  This season, UNLV will first play Davenport University on Saturday night. Then depending on the results of Saturday’s match ups could face defending champs Minot State for the first time this season, as they will be playing Illinois in the other contest Saturday.

Start time for Saturday’s game is slated for 4pm Pacific Time from Fifth Third Arena, the practice facility of the Chicago Blackhawks.