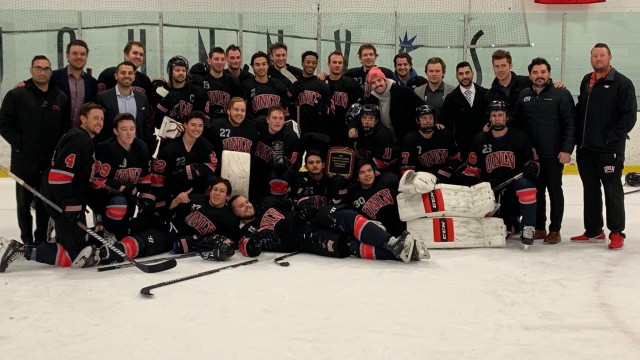 Hoping to move past the 1-2 weekend in North Dakota, the Skatin’ Rebels went into the windy city to participate in the 2018 Chicago Classic, hosted by Illinois.  They first faced a tough Alabama team and then would face either the host team, #6 Illinois or Rhode Island.

Saturday night, UNLV started the scoring in their matchup with #20 Alabama thanks to Tristan Mayer with assists by Cody Williams and Joe Kaszupski.  UNLV added another goal in the second period as Mayer returned the favor and helped set up a goal by Cody Williams.  UNLV went into the second intermission up 2-0.  After a delay for Zamboni issues, the third period would finally begin and Alabama would get a gift of a goal due to Geisbrecht misplaying the puck to set up an easy short-handed unassisted goal for the Tide.  Alabama would strike again to even the game up at 2 with 13 minutes left.  Later in the third, senior Viktor Brask would score his first goal of the season to put UNLV back on top 3-2.  That goal would prove to be the game winner and UNLV would punch their ticket to the championship game Sunday Afternoon.

After Illinois beat Rhode Island, the championship matchup would be set, as UNLV would go up against the host team, #6 Illinois.  UNLV would dominate in what is definitely the best game of the season for the Skatin’ Rebels.  The first period saw UNLV score first, seven minutes in thanks to assistant captain #8 Joe Kaszupski, with Malone and Turcotte assists.  UNLV erupted for three more goals in the second period (Turcotte, Marshall, D’Andre John) to lead 4-0 after two periods.  The third period would be much of the same for UNLV as Marshall scored his second of the night to go up 5-0.  Seconds later Illinois would score to prevent the shutout and make it a 5-1 game.  UNLV, with Geisbrecht in net, would keep the Illini from scoring the rest of the game and UNLV would tack on another goal for good measure with roughly 4 minutes left thanks to Malone with Kameron Fink getting credited with an assist.  That would be the final score and the Skatin’ Rebels beat two really good teams to capture the Chicago Classic Championship.

The Skatin’ Rebels are now 11-4-0 and as of right now will not see any game action again until January after the Christmas break passes.  So it will be practice until then and maybe a couple games can be scheduled before the break hits.

Also of note from the tournament is that Senior Joe Kaszupski was named Tournament MVP.  Kaszupski had an assist in Saturday’s game vs. Alabama and a goal in Sunday’s game.

Keep it here on rebelhockey.com and on all social media channels for the latest news regarding your Skatin’ Rebels.