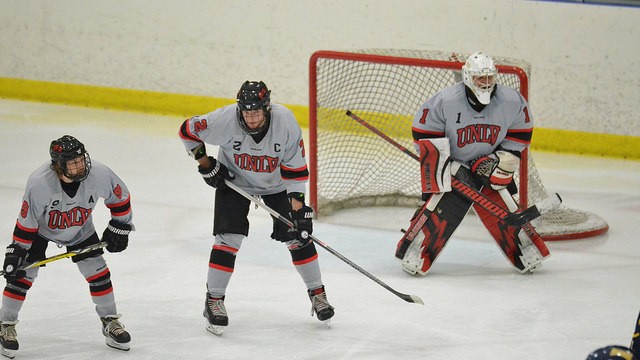 Your Skatin’ Rebels now stand at a 15-5-0 record after three big wins in Colorado in the final set of games prior to the winter break. One win came against the University of Colorado and two wins came at the expense of Colorado State University.

On Thursday night, UNLV faced off against U of Colorado and dominated for a 6-2 win. The Buffaloes got on the board first midway through the third period but UNLV’s Cody Williams got the equalizer with a minute remaining in the frame. He followed that up with his second goal of the game to take the lead midway through the second period, and then Elijiah Barriga extended the lead to 3-1 just 1:10 later. Colorado shortened the lead, but Williams notched a hat trick with his third goal scored right after to regain the two-goal lead. Two more UNLV goals came in the third period, from Kameron Fink and Barriga (second of the game) for a 6-2 final. UNLV trailed in shots 18-28, and Ben Giesbrecht made 26 saves in net.

Friday night’s game against the CSU Rams ended 6-0 and Alex Feese secured the 26-save shutout. Six different skaters found the back of the net for UNLV throughout this game. First period goals came from Jonas Gordon, Bas Assaf and Trevor Ruiz. Kameron Fink and Colin Robin scored in the second period, and then Jonah Pearson capped off the win with the final goal of the game about four minutes in.

The Skatin’ Rebels kept the momentum going to pick up a big win in their final game of the semester on Saturday. With a 5-3 final, the Rams provided a bit more competition for UNLV compared to the previous night, even maintaining the lead for portions of the first and second period. UNLV got on the board first with a goal from Pearson, but then the Rams notched two within ten minutes. Barriga tied it up with a few minutes to go in the period. A minute after the puck dropped for the second frame, Colorado regained the one-goal lead. Barriga then notched his second of the game to tie it once again. The third period saw two more UNLV goals, both from Fink for a 5-3 final. Feese was in net once again and saved 32 of Colorado’s 35 shots.

These three wins in Colorado increase UNLV’s winning record to 15-5-0 as the team heads into the winter break on a good note. The team returns to action on the road in mid-January, facing Minot State and Jamestown. The full schedule for the second half of the season can be found at rebelhockey.com.