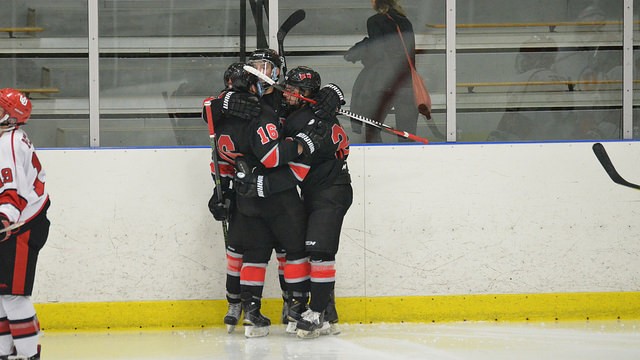 The Skatin’ Rebels hit the road to Salt Lake City, Utah, for a pair of road games this past weekend. On Thursday, they faced off against the University of Utah and then played Canisius College, out of Buffalo, NY, on Friday. The two wins this past weekend leaves them with a 12-5 record.

Skatin’ Rebels captain Jake Kearley got the scoring started for the Rebels on Thursday, six minutes into the game. Jonah Pearson followed it up with another Skatin’ Rebels goal 1:40 later, doubling the lead to 2-0. Utah got one back shortly after to cut the lead in half. Mitchell Province scored early in the second period to get the two-goal lead back, followed by a goal from Elijiah Barriga midway through the frame. The Skatin’ Rebels win was capped off by Kearley’s second of the night in the third period, which ended with a 5-1 final in favor of UNLV. Ben Giesbrecht was between the pipes for the Skatin’ Rebels and stopped 36 of 37 shots faced.

Canisius College also made the trip to Salt Lake this past weekend, where they met the 13th-ranked UNLV. The first period saw goals from Trevor Ruiz and Cody Williams to take a  2-0 lead into the first intermission. Canisius scored their first of two goals three minutes into the third period, and then the Skatin’ Rebels responded with four in a row prior to the end of the period. The UNLV goals came from Barriga, Kearley, and Kaszupski (2). UNLV kicked off the third period with another goal, this time scored by Jonah Pearson. Canisius scored what would be their final goal, cutting their deficit to it 7-2. The rest of the third period saw five more Skatin’ Rebels goals for a 12-2 final. The remaining goals in the third period came from Barriga (his second of the game), Colin Robin, Riley Williams, Jake Saxe and Mitchell Province. Alex Feese got the win in net, saving 15 of 17 shots.

UP NEXT: The newest set of ACHA Division 1 rankings will be released Wednesday, and we’ll see where the Skatin’ Rebels place after a big two-win weekend. UNLV faces Colorado University and Colorado State University following Thanksgiving as they head to Colorado for a three-game set November 30 – December 2.