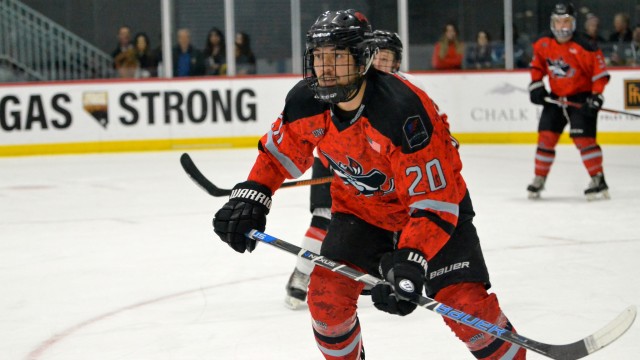 It was a big weekend for the Skatin’ Rebels as the organization honored our nation’s veterans with specialty jerseys worn during games and auctioned off to benefit the Folded Flag Foundation. UNLV, ranked 15th in ACHA DI, was set to face Jamestown (13) and Minot State, who was undefeated in regulation and sat atop the rankings in the first place position.

On Thursday against Jamestown, UNLV got the lone goal of the first period, picking up a 1-0 lead at the end of 20 minutes from Elijiah Barriga. Joe Kaszupski doubled the lead by tallying a goal halfway through the second period, but Jamestown quickly retaliated two minutes later to cut the lead in half. Before the second period came to a close, Jamestown tallied another to tie it up at 2-2. Barriga notched his second of the game, four minutes into the third frame, regaining the lead for the Skatin’ Rebels, followed by a goal from Kameron Fink to extend the lead to 4-2. Jamestown beat UNLV goaltender Alex Feese to notch one more and then pulled their goaltender for an extra attacker in an attempt to tie the game in the final moments. However, UNLV’s Zach Lawson scored an empty-net goal for the 5-3 win. UNLV outshot Jamestown 27-19.

The Skatin’ Rebels had the momentum after a big win the previous night but were still set for a tough matchup against the league’s number one ranked team on Friday. Minot State, undefeated prior to this weekend, suffered their first regulation loss of the season at the hands of UNLV. Minot scored first, but the Skatin’ Rebels retaliated with a second-period goal from Kaszupski to tie it up. Midway through the third period, UNLV broke the deadlock as Tristan Mayer scored the game-winning goal for a 2-1 final. Minot State outshot UNLV 28-26 and Ben Giesbrecht was between the pipes for the Skatin’ Rebels.

It was a close game again on Saturday, as Minot State came up on top in the end. Minot got the first goal of the game just under two minutes in and extended their lead to 2-0 shortly after. UNLV retaliated with two goals in the first period, scored by Cody Williams and Joe Kaszupski, and the teams went into intermission tied at two goals apiece. The Skatin’ Rebels then took a 3-2 lead just 30 seconds into the second period as Kaszupski scored his second of the game. Minot notched two more in the second period, followed by Williams’ second of the game, making it a tie game once again heading into intermission, this time tied 4-4. The third period was scoreless for UNLV, and Minot State scored their game-winning goal with just over a minute remaining in the game for a 5-4 final. Giesbrecht was in net again for UNLV, stopping 34 of Minot’s 39 shot attempts. UNLV had 17 shots on goal.

Next up, the Skatin’ Rebels head on the road this Thursday and Friday to face the University of Utah and Canisius College (from Buffalo, NY). Both games will be held in Salt Lake City at the SLC Sports Complex. Thursday’s game against Utah is set for 8:15 p.m. MST and on Friday, puck drop is set for 7 p.m. MST.