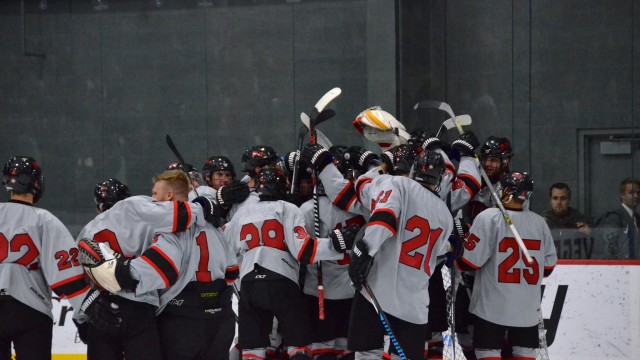 The Skatin’ Rebels split the weekend series against the 12th-ranked Iowa State, picking up a regulation loss and an overtime win to head back to Las Vegas with a record of 8-4-0.

On Friday night, Iowa got on the board first with a goal 10:58 in. The rest of the first period was scoreless on both sides, along with the first minute of the second period, up until Iowa extended their lead to 2-0 on the power play 1:47 into the frame. Elijiah Barriga opened up the scoring for UNLV at the tail end of the second period to cut Iowa State’s lead in half. Iowa regained the two-goal lead 7:21 into the third period, but Viktor Brask got one back for UNLV on the power play, who trailed 3-2 at that point. In an attempt to tie the game with minutes remaining, UNLV pulled goaltender Ben Giesbrecht for an extra attacker. Iowa scored an unassisted empty net goal shortly after, but Barriga scored his second of the game to bring their deficit to 3-4. With Giesbrecht still pulled, Iowa scored in the empty net once again for a 5-3 final. UNLV outshot ISU 40-33.

Both teams found the back of the net fewer times on Saturday, with stellar goaltending on both sides being the story. Giesbrecht was in net once again for UNLV, ultimately saving 56 out of Iowa’s 57 shots. UNLV had 46 shots. The first period was scoreless, and Chase Torontow drew first blood for UNLV at the 15:54 mark of the second period. Iowa State tied the game midway through the third period. Neither team broke the deadlock in overtime, so they headed to a shootout. Kameron Fink scored the lone goal of the shootout, in the fifth round, to capture the win for the Skatin’ Rebels.

UNLV is off this weekend, but the team returns to home ice the following weekend to face Minot State and University of Jamestown. Jamestown is currently ranked 9th, and will play UNLV at City National Arena in a Thursday night match-up on November 9 at 7:30 p.m. Minot State is ranked 1st in the ACHA D1, and will be an especially tough test for UNLV when they face off on Friday, November 10 and Saturday, November 11 at 7:30 p.m. both nights, also at City National Arena.