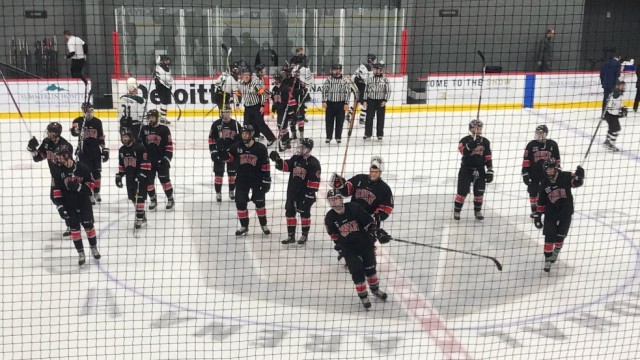 It was the first goal of the two-game series scored midway through the first period on Monday – off the stick of Elijiah Barriga – that sparked UNLV’s offensive outpour and propelled them to 8-4 and 8-2 victories over Williston State on Monday and Tuesday.

On Monday, the Skatin’ Rebels captured an 8-4 win, highlighted by the team scoring four goals in just over a minute and a half of play during the first period. Barriga’s was the first goal, and the others came from D’Andre John, Jonas Gordon, and Cody Williams. Williston got on the board to make it 4-1, but UNLV regained the three-goal lead shortly after, as PJ Silviera scored against his former team. Williston State then scored three unanswered goals, making it a one-goal game. The Skatin’ Rebels kept Williston scoreless in the third period, scoring three more goals themselves. Barriga and Williams both notched their second goals of the game, and Matt Painchaud got on the board with UNLV’s final goal. Mike McDaniel got his first start in net, picking up the win and also assisting on Painchaud’s third period goal. UNLV outshot Williston 41-16.

Tuesday was a similar story, as UNLV found the back of the net just as many times as the night before and kept Williston’s scoring chances to a minimum. The Skatin’ Rebels scored five goals in the first period, coming from Daniel Luyten, Tristan Mayer, Viktor Brask, Jake Kearley and D’Andre John. They continued the scoring tear into the second period, with Williston remaining scoreless. The second period UNLV goals came from Painchaud, Pearson, and Assaf, and they led 8-0 a little over halfway through the second period. Williston State then scored their first of two goals to finally get on the board, and then notched their second goal during the third period. Ben Giesbrecht got the win in net, and UNLV outshot Williston dramatically once again, 41-14.

In the most recent ACHA DI rankings, UNLV remains at the 14th spot with a 7-3-0 record. Two spots above them is Iowa State (7-2-0), the Skatin’ Rebels opponent this Friday and Saturday on the road. Both games are set for 7:30 p.m. CST.