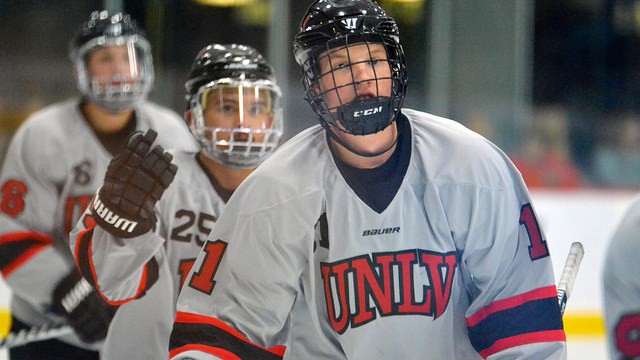 UNLV Hockey traveled to Athens, Ohio this past weekend to take on the Ohio University Bobcats for two games. Coming off of a weekend of momentum after a sweep against Utah State, the Skatin’ Rebels, ranked 14th, knew this weekend would be a tough feat as they faced the league’s 5th-ranked team.

On Friday, the Skatin’ Rebels took a quick 1-0 lead off the stick of Elijiah Barriga just eleven seconds after the puck had dropped. However, their scoring on UNLV’s end stopped there. Ohio scored a second period goal to tie the game, and then took the lead with a goal early in the third period. UNLV seemed to have tied it midway through the third, but the goal was disallowed as it was deemed it was scored offsides. Ohio then scored their third goal in the final seconds of the third period when the Skatin’ Rebels pulled goaltender Ben Giesbrecht for the extra attacker. The Bobcats outshot UNLV 44-11.

Saturday fared the same with one team getting on the board in the first minute of the game, but this time Ohio was the first to find the back of the net. They followed that up with three more goals in the first period, and then two more in the second period, leading UNLV 6-0 at that point. UNLV got on the scoresheet when Jake Saxe notched a goal two minutes into the third period. The Bobcats retaliated with one more, and took the win by a 7-1 final. Ohio outshot UNLV 40-23, and goaltenders Giesbrecht and McDaniel split time in net for the Skatin’ Rebels.

UNLV faces off next against Williston State on Monday, October 23 and Tuesday, October 24 at 7:30 p.m. at City National Arena. Williston is winless at this point in the season, with a record of 0-4-0.