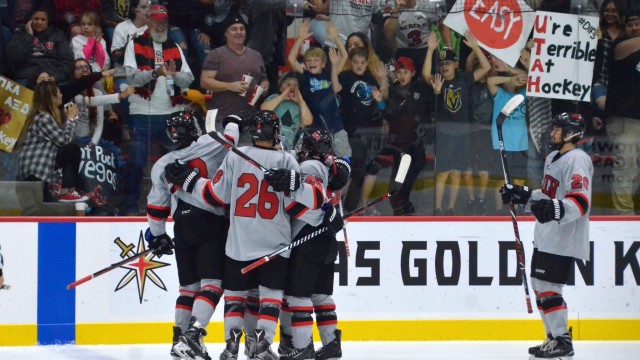 The Skatin’ Rebels had even more to fight for than usual this weekend as they faced the University of Utah on Friday and Saturday. They weren’t just battling for two wins – they were battling for assistant coach Nick Robone, for their fans, and for the entire city of Las Vegas after last Sunday’s tragic shooting.

Throughout the emotional weekend, UNLV scored a combined 18 goals while allowing only six. On Friday, they secured a shutout with an 8-0 win. The first period was scoreless on both sides, but then the Skatin’ Rebels released the floodgates by scoring six during the second period. Goals were scored by captain Jake Kearley, Matt Painchaud, Cody Williams, Kameron Fink (2) and D’Andre John. The Utes were kept scoreless during the third period, and UNLV notched two more, from Elijiah Barriga and Jake Saxe.

On Saturday, Utah got the ball rolling first with two first period goals less than two minutes apart. UNLV retaliated with a goal from Joe Kaszupski, but the Utes snagged the two-goal lead right back with less than a minute remaining in the frame. The Skatin’ Rebels followed that up with five goals in the second period, coming from Jonas Gordon (2), Elijiah Barriga, Tristan Mayer, and Matt Painchaud. Utah tallied a few as well, but the period ended with UNLV on top 6-5. The Skatin’ Rebels continued the scoring tear throughout the third period, which was a chippy one as multiple players on both sides exited the game with misconducts. Kaszupski, Mayer and Barriga all scored their second goals of the game, and Sean Plonski tallied one as well. Utah got one more in the back of the net at the 19:13 mark, but it wasn’t enough as UNLV took that one by a 10-6 final.

The Skatin’ Rebels head out on the road to face Ohio University this Friday and Saturday. Both games are scheduled for 7:30 p.m. EST.